Hi there folks... thanks for checking in here at Pecan Pie Puppies. If you'd like to read our newest adventures, please visit us at Five Dog Farm.
Posted by pecanpiepuppies 3 comments: 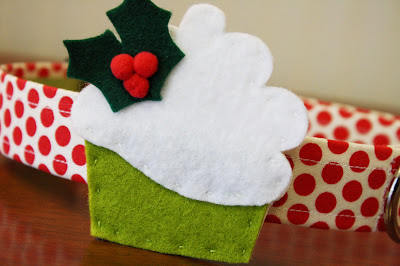 Oh, yes... it's time for Christmas collars once again. I'm putting them in the shop a little earlier this year because I'll be closing down the shop the Sunday after Thanksgiving. 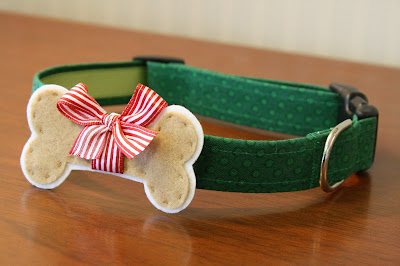 From about November 1st until December 23rd last year, I was getting about 3 hours of sleep each night (and pulling an all-nighter at least once a week) to get all of my orders out on time. And while I was SO incredibly grateful for the business, I literally began to hate the holidays because I was sleep-deprived and REALLY cranky. I had zero time to shop for or wrap gifts, spend time with family and friends and if it weren't for my mother, I probably wouldn't even have had a Christmas tree. 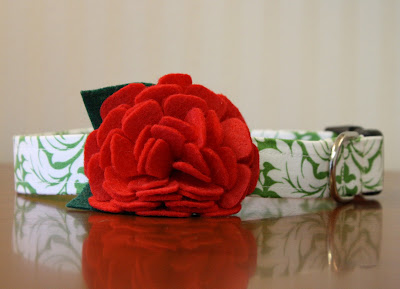 So I'm determined to actually enjoy Christmas this year... hence the reason the shop will be closing on November 27th.
So make sure to order early this year... I think the new styles are pretty cute! And my classic Poinsettia collar, along with my tartan bowtie collars, are back in the shop this year too!
Posted by pecanpiepuppies 12 comments:

football season is upon us! 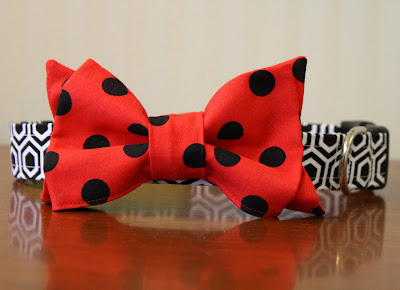 Just for you Bulldog fans... ﻿
Happy Friday friends... It's football season folks and I'm excited! I love this time of year, and I'm sending good thoughts to my Clemson Tigers. My blood runs orange and if you've never experienced the most exciting 25 seconds in college football, you don't know what you're missing!

And if you have a favorite team that I haven't listed, you can always contact me for a custom order...
Posted by pecanpiepuppies 2 comments: 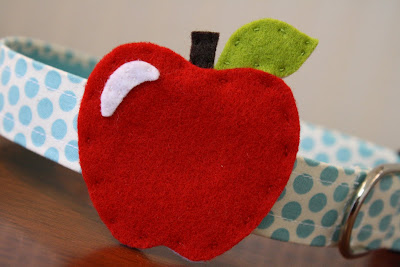 My newest collar... just in time for Back to School shopping! It would be super cute for those pups headed to obedience and training classes. Or it would be the perfect gift for a favorite teacher that loves her four-legged best friend! 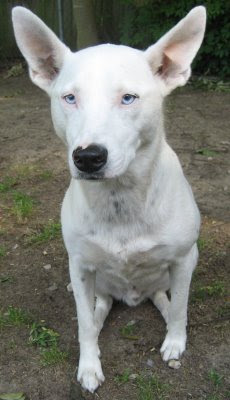 Just wanted to wish the old guy in my house a Happy 8th Birthday... I can't believe that little scraggledy pup I found wandering around in the rain on Valentine's Day so many years ago is eight years old! Love you and your giant ears sweet boy!

Posted by pecanpiepuppies No comments:

Honest Kitchen Ice Pups are awesome. I recently ordered some for my crew, and they are now Ice Pups' biggest fans.
Honest Kitchen is an amazing company... I highly recommend their regular foods as well. But the Ice Pups are so great for summer. It's basically a tin filled with a healthy mix that you combine with warm water. And in an age where I can't pronounce half the ingredients in many foods I find, it's so nice to find simple and healthy products. Ice Pups have eight ingredients... Chicken, Turkey, Whey, Dandelion, Asparagus, Watercress, Honey, Parsley.

You just freeze the mix in an ice cube tray (I used this ice tray that makes little bone-shaped treats), and in no time you'll have icy treats that dogs LOVE. And another great feature is that you can serve this warm as well... so in the wintertime, you can offer it to your dogs as a toasty treat.
Posted by pecanpiepuppies No comments:

My brother is spectacularly awesome. I know that as his older sister I'm sort of obligated to think he's that way, but all bias set aside... he really is amazing.
He's an F-18 Hornet fighter pilot in the U.S. Navy. And he recently deployed aboard the Navy's newest aircraft carrier - the U.S.S. George H.W. Bush. My mom, sister-in-law and I are constantly trying to come up with creative and different things to send him while he's away. So I figured that I should just use what I have at my disposal - the dogs (and my cat!). 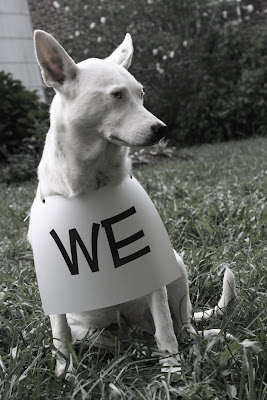 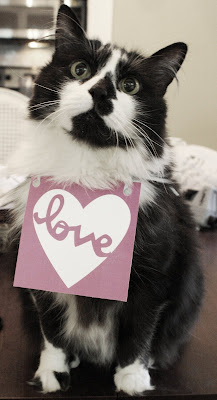 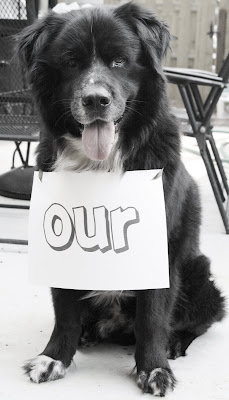 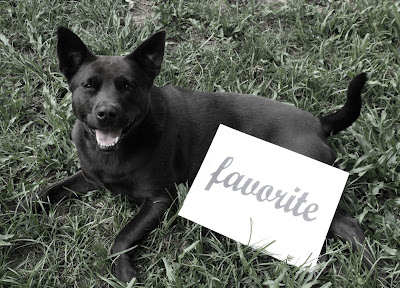 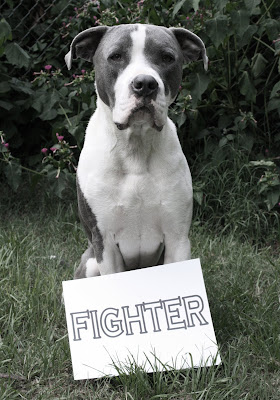 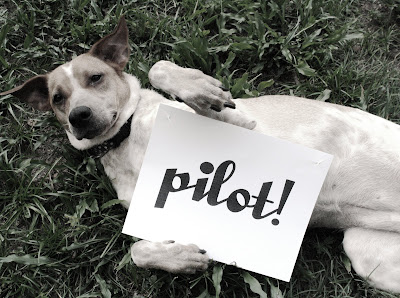 just to make you smile

I'm sure LOTS of you have seen this video, but I'm posting it anyway. It makes me laugh so hard every time I see it, and I never get tired of it.

I think what makes it so funny is that if a dog could talk, this is exactly how it would go...

Posted by pecanpiepuppies No comments: 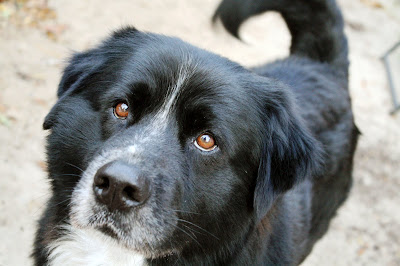 So what was that I was saying about enjoying having only four dogs for a while? Yeah, y'all didn't buy that right?

How handsome is that kiddo above? His name is MacDougall (Mac for short) and he's been crashing at my pad for about a month now. And he's precious. And large. And fluffy. And I love him.

So here's his story... I got an email the last time I was up in Greenville, SC about a six year old Bernese Mountain Dog that was living chained outside and the family didn't want him anymore. My heart about broke in half because I've always had a major soft spot for Berners, and I knew that as a Berner, he wouldn't live much longer because six years old is pretty old for that breed.

So the rationalization in my head went... "I'll just let him live out his remaining time with me. He won't be around much longer, and I'll make him comfortable and happy for as long as I have him."

Well, I showed up to the meeting with the people who had him (who, incidentally, actually brought him there ON THE CHAIN and not on a leash), and lo and behold, he was most definitely NOT a Bernese Mountain Dog. But he definitely was sweet and gentle, and I was a goner.

So now I have a middle-aged giant fluffball (my best guess at his origins is perhaps a Great Pyrenees cross) living in my house. He gets along splendidly with all my kids, loves everyone he meets, and is a model tenant.

Unfortunately, he does have some health problems that are beyond his control. He was never given heartworm meds, and so he is heartworm positive. And he had some x-rays done last week that revealed severe hip and elbow dysplasia. So right now we're working on pain management with fish oil supplements, glucosamine/chondroiton supplements and Rimadyl. And he's feeling so much better! And - don't tell him this - but big boy will have his manhood taken away tomorrow (he was allowed to wander prior to being chained up so I shudder to think how many mini-Macs there are running around Greenville County).

So glad you guys have met my newest addition! I'll keep you posted and up-to-date on his progress!
Posted by pecanpiepuppies 3 comments: 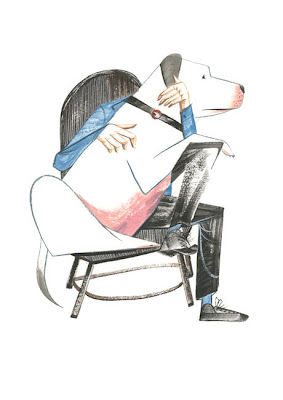 I love it when someone manages to capture an aspect of the relationships we have with our dogs just through a simple illustration. I can't tell you how much this reminds me of my dad and Quincy. Ping Zhu is such a talented illustrator, and you can grab the fantastic print above at her online store here.
Posted by pecanpiepuppies No comments: 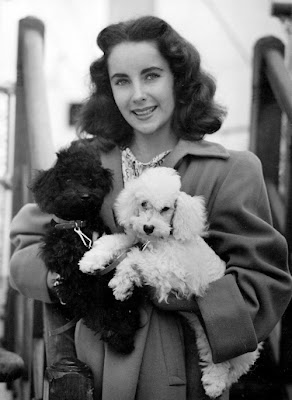 Elizabeth Taylor was the living definition of a movie star. She got her start as a child actress working alongside the most famous collie in the world, and one of her famous quotes is - "Some of my best leading men have been dogs and horses." She will be missed...
Posted by pecanpiepuppies No comments: 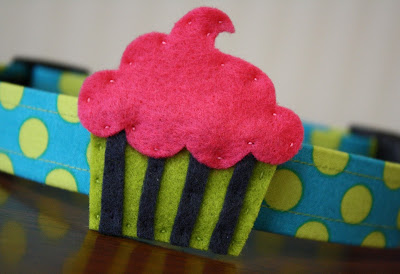 Get your cupcake on...
Posted by pecanpiepuppies No comments:

Usually all I can think about when I see post-it notes is that episode of Sex and the City where Berger breaks up with Carrie on a post-it. Know the one I'm talking about? He leaves her apartment in the middle of the night, and just sticks a note to her computer that says "I'm sorry. I can't. Don't hate me." God, I miss that show.

Anyway, getting back on track here... How cute are these doggie post-its? I use sticky notes all the time for EVERYTHING so I'm going to buy these as soon as I finish typing this post! 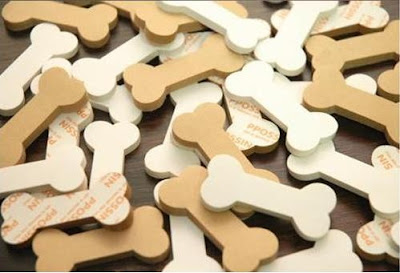 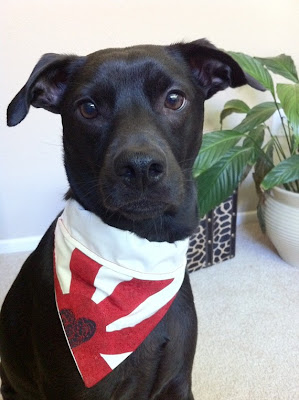 We all watch with heavy hearts as the events in Japan unfold, and I know most of us want to do whatever we can to help in big and small ways. All proceeds of the sale of these dog bandanas go to World Vets - a group who works in emergency situations with teams of first responders in disaster areas to asses and begin treatment of the animals affected by the disaster. Their teams are already on the ground in Japan working tirelessly to help as many animals as possible. So if you and your pup would like to support the work they're doing in Japan, you can purchase a bandana here or contribute directly to World Vets here.
Posted by pecanpiepuppies 2 comments:

something to strive for... 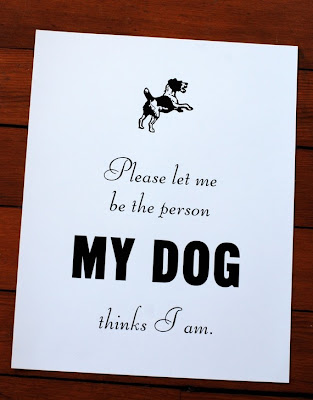 I've always loved this saying and now it's available as a hand silkscreened print in the sfgirlbybay shop!
Posted by pecanpiepuppies 3 comments: 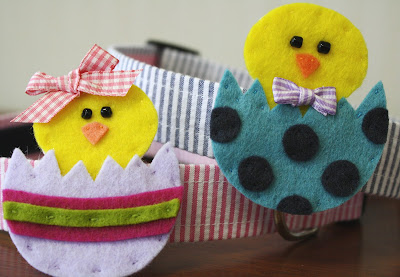 Meet the twins... Sylvia and Lewis... they're pretty cute, right? They're available in the shop through Easter!
Posted by pecanpiepuppies 1 comment: 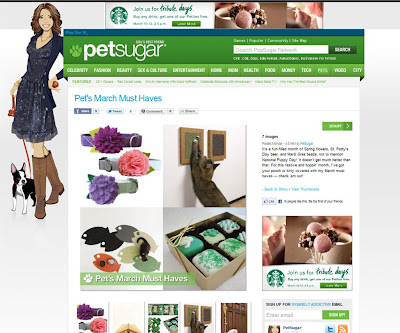 Head on over to PetSugar to check out their March must-haves... they're showing Pecan Pie Puppies some love! And while you're there, make sure to look around at all the other fun information they have available!
And if you want to win a free Pecan Pie Puppies collar, visit Life as a California Wife and enter to win!
Posted by pecanpiepuppies 3 comments: 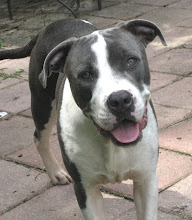 This blog began as a story about my crazy experiences in the world of dog rescue, and it all started with a litter of seven amazing puppies I had the pleasure of raising. My blog also now features information on dog training, treats, toys and anything else dog-centric! I also have my own business crafting handmade dog collars to help finance my ongoing dog rescue efforts. So please check them out. I hope you find this blog useful and fun, and I hope it encourages you to have a better relationship with your four-legged child! Thanks for visiting!